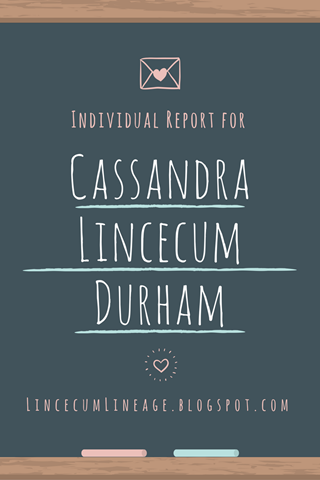 The few times I've seen Cassandra's name spelled out, it's been fairly consistent.  Her marriage record did add an i to get Cassandria, though.  And a possible error by a grieving informant for one of her children's death certificate resulted in her maiden name being displayed as C. Alinska.  We know from her father's papers, that Gideon called her Cass.

When Cassandra was just a few years old, her father went "on an exploring expedition to the province of Texas." Gideon returned home about seven months later.  He "rode up to the yard fence" and observed the homeplace:

The family were at dinner under the long shed that reached from the house to the well.  They were so much engaged they did not see me for some minutes.  I had time to count the children and see they were all there.  Two of them, Leonora and Cassandra, whose heads were a yellowish brown when I went away, were black now, and that was about all the change I could discover…The family then quit the table and did not finish their dinners.  [Source:  Adventures of a Frontier Naturalist: the Life and Times of Dr. Gideon Lincecum, pub. 1994]

By the time Cassandra reached the age of 18, this Lincecum clan had been moved to Washington County, Texas.  And this is where, just before Christmas 1852, Cassandra married George John Durham (1820-1869).  They had seven children:  Mary Leonora (aka "Lee"), Walter Winn, Sarah Lincecum (aka "Sally"), Royal Wheeler, Sidney Johnson (aka "Sid"), Prior/Price [?], and Leila/Lila/Lelia/Lela (possible first name "Mary").  It is claimed that only three made it to adulthood.

After marriage, Cassandra and George settled at Austin, Travis County, Texas.  City directories available at Ancestry show the precise address in the 1870s to be the southwest corner of Pecan (now 6th) and Guadalupe streets.  I do believe that had been the family home since the couple was first married, though.  As early as 1849, George described his property in a notice published in the local newspaper:

NOTICE TO TRESPASSERS.
A
LL PERSONS are hereby forewarned against cutting or destroying any of the timber on the tract of land belonging to me, lying on the West bank of the Colorado River, in the County of Travis, about 1/3 of a mile below Stone's Ferry, as I will prosecute any and all persons so offending to the utmost rigor of the law, GEORGE J. DURHAM.

Here's a map of the area today.  If explored, you can see where Guadalupe and 6th (formerly Pecan) cross is approximately five blocks from the Colorado River.

[Additional Map Links:  You might also want to click here for an 1873 map of Austin.  If enlarged, you can see the same thing – though much less crowded.  Lastly, click here for an 1844 map of the city.  This shows the much more wooded terrain possibly described by George in his 1849 "Notice to Trespassers."]


...The Durhams lived in a small log house on the road to the ferry.  Everyone coming into town and every one going out of town passed Mrs. Durham's.  Her sitting room was as entertaining as the local news in the weekly paper.  There was no restraint in Mrs. Durham's company; people could be themselves without fear of criticism.  She was not pretty, not stylish, not clever, not in the least fashionable, but she was the favorite of women who were all these things.  There were no carpets on the floors and there was a bed in the room wherein her friends congregated.  She did not go to entertainments and I never saw a cup of tea served in her house, yet she was the most popular woman in Austin…

Typhoid fever killed Cassandra's husband George in April 1869.  She was left with three children, aged 14, 9, and the youngest about 1 year old.  Cassandra supported her family by running a boarding house in Austin, presumably on the Durham family property.  Following culled from letters Gideon wrote a daughter and son-in-law in 1873 – around a time he paid Cassandra a visit.

...Cassandra and her family are all well.  Cass does all the cooking herself, with Sidney's help.  He supplies the wood and water, attends to setting the table, etc.  Walter rises early, feeds and waters the dogs and chickens, goes to market, and then, until breakfast, fixes up anything that is out of order.  That over, he goes off to the house that pays him for his services and is seen no more until dark.  The little girl is very healthy, looks handsome and…is beginning to help her Mamma a little…

...Leonora in Tuxpan [Mexico] and Cassandra in Austin...my two widowed daughters.  Both hold in the society to which they belong high positions.  I don't know which of the two is most sought after or most beliked...Cassandra, the stately, slow moving, young looking, rather handsome Cassandra.

Cassandra Lincecum Durham's death, caused by pneumonia, came 8 April 1877.  She was just 45 years old.  Cass was buried beside her husband in the family lot at Oakwood Cemetery in Austin.

That is very sad. The little girl was still pretty young. I wonder if she stayed with her brothers or if they took her to the aunt.
http://findingeliza.com/

I'm working on a post about the children, Kristin, and she is giving me the most trouble. :-) I know the oldest son became guardian of the other two, but I lose Lela after the 1880 census. Since she supposedly made it to adulthood, I think she likely married...still searching! Thanks for the comment.