George Lachoen Lincecum was born 4 February 1886 in Texas to George Durham Lincecum (1854-1931) and S. Frances Amada "Fannie" Stubblefield (1867-1947). Fannie was a daughter of Stephen Potts Stubblefield (b. 1824). Research suggests young George was the eldest of six children born to Fannie and her husband.

George, Fannie, and the kids were in Gonzales, Texas for the summertime taking of the 1900 census. By the end of NewYear's Day of 1901, young George was dead.

Toy Pistol Caused Death.
SPECIAL TO THE NEWS.
Gonzales, Tex., Jan. 3 -- George Lachoen Lincecum, aged 15 years, who was shot in the finger Christmas with a toy pistol, from which lockjaw resulted, died New Year's day at the home of his parents, Mr. and Mrs. George Lincecum.

An obituary that ran a couple days before in the Gonzales Inquirer stated, "He was an excellent boy and was liked by all who knew him. He worked in his father's store on North Avenue and was well known. During the holidays he was wounded in the hand by a toy pistol, and a part of the wad from the cartridge remained in the wound." 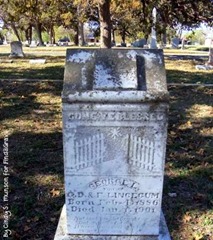 Burial was in the Gonzales Masonic Cemetery.

I have yet to find Val or Norton after the 1900  census, and wonder if they might have died at a very young age.

[Note: There is an image of young George on a remembrance card issued (presumably) about the time of his death on his FindAGrave memorial.]