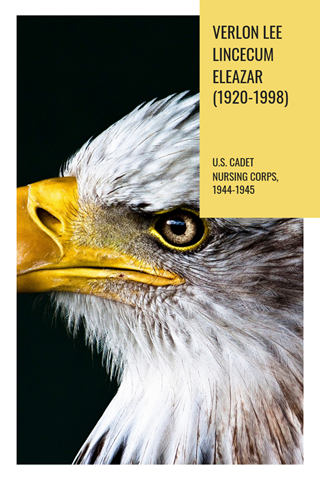 Verlon Lee Lincecum was born 14 September 1920 in Grant Parish, Louisiana. She was one of at least seven children born to Gideon G. "Gid" Lincecum (1881-1970) and Emma Lee Brister (1887-1976). I have her as the sixth child, and second daughter. Siblings include the following:

Prior to her marriage to Leon, Verlon Lee studied and trained to be a nurse. By 1941, she was a student nurse at Tri-State Hospital in Shreveport, Caddo Parish, Louisiana. By January 1944, she had obtained a Registered Nurse degree and was a member of the U.S. Cadet Nursing Corps. Her postgraduate study was completed at Barnes Hospital in St. Louis, Missouri. In April 1945, Verlon had completed training to become a Nurse Anesthetist, and was back at Tri-State in that capacity soon after – definitely by 1947. 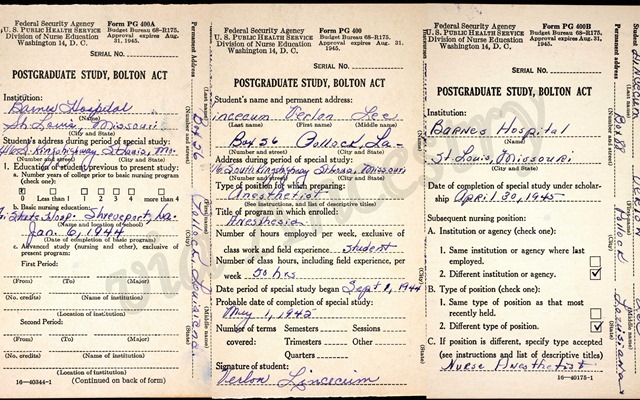 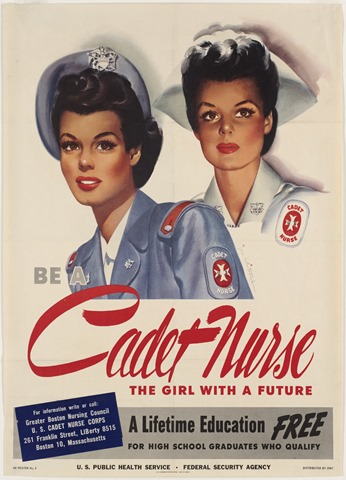 The United States Cadet Nurse Corps was established by the U.S. Congress on June 15, 1943…Its purpose was to ensure the country had enough nurses to care for its citizens at home and abroad during World War II…

…Successful applicants were eligible for a government subsidy that paid for tuition, books, uniforms, and a stipend. In exchange, they were required to pledge to actively serve in essential civilian or federal government services for the duration of World War II…

At this moment of my induction into the United States Cadet Nurse Corps of the United States Public Health Service, I am solemnly aware of the obligations I assume toward my country and toward my chosen profession; I will follow faithfully the teachings of my instructors and the guidance of the physicians with whom I work; I will hold in trust the finest traditions of nursing and the spirit of the Corps; I will keep my body strong, my mind alert, and my heart steadfast; I will be kind, tolerant, and understanding; Above all, I will dedicate myself now and forever to the triumph of life over death; As a Cadet nurse, I pledge to my [country] my service in essential nursing for the duration of the war.

End of the Corps

Following the surrender of Japan in August 1945, President Harry Truman set October 5, 1945, as the final date for new student admissions, allowing for an "orderly transition of an important wartime activity"...Student nurses were providing 80% of the country's nursing care in more than 1,000 civilian hospitals…

In January 1945, the Surgeon General, Thomas Parran, Jr., appeared before the House Committee on Military Affairs and said, "In my opinion, the country has received and increasingly will receive substantial returns on this investment. We can not measure what the loss to the country would have been if civilian nursing service had collapsed, any more than we could measure the cost of failure at the Normandy beachheads."

A plaque dedicated to the Nursing Corps was placed in 2017 at Eisenhower Park, East Meadow, New York. It reads, in part, "They saved lives at home, so others could save lives abroad."

Another Relative in the Corps?

Jean Etta Linsacum was a member of corps, as well. She was admitted in 1944 at age 18 and attended the Colorado Training School for Nurses at Denver. Her membership card noted her to be a daughter of Kenneth Linsacum, a farmer of Montrose County, Colorado.