(OTL) Amanda Jane Stubbs Watts and Tuberculosis of the Spine

She was my 2nd great grandmother.

Amanda Jane "Mandy" Stubbs was born on 23 May 1856 in Christian County, Missouri. She was one of at least eleven children born to Arametta/Ametta Friend and Robert Stubbs. Mandy married James Riley Watts (1860-1952) on 4 April 1880, and they possibly had seven children:

She was a kind and loving wife and mother, we miss her very much but God said "come unto me."

...We should be happy to know that she is at rest, she made an early profession and leaves a clear record behind.

She had been in bad health for some time but bore it well until the end. For four or five years she was unable to do her work but she found comfort in Jesus.

...We cannot call her back but we can go to her; so do not weep but follow on to the "glory land."

The bereaved ones have our sympathy.

This obituary combined with Jane's death certificate, which showed her cause of death as Tuberculosis of the Spine, painted a sad and suffering ending to her life. It reminded me of a book I am currently reading: The War Outside My Window: The Civil War Diary of LeRoy Wiley Gresham, 1860-1865 [affiliate link]. This book not only details life in middle Georgia during the Civil War, it also details the plight of a young man suffering through what modern doctors say was tuberculosis of the spine, also known as Pott's Disease. Excerpts from the "Medical Afterword" portion of the book:


...LeRoy early on develops an open sore on his back...Plasters and salves and liniments are employed to treat the back pain and the sores, but the young patient goes on to develop abscesses, first on the left side of his back, and later on both sides...In 1863 (and perhaps earlier) they are "running freely," discharging large quantities of pus continually, suggesting the presence of a large, deep, and incompletely evacuated source of infection.

As the pain intensifies, LeRoy's back becomes so weak he cannot sit up without pain...

On May 23, 1864, he writes, "One joint of my spine, right between the abscesses is very sore and you can see the matter, as it runs from the joint to the abscess."

Gresham's back ulcers, progressing to chronically draining abscesses, and the progressive pain and weakness in his spine, suggest that he suffered from Pott's Disease -- extrapulmonary tuberculosis of the spine, extending into the paraspinal or psoas muscles and causing the chronic drainage there...

[Evolution of spinal tuberculosis summarized from medical journals "in our current era:"]

The natural course of skeletal tuberculosis without chemotherapy passed through three stages spanning 3-5 years. In the "stage of onset," lasting from one month to one year, the localized disease developed into a warm tender swelling with marked localized osteoporosis and minimal destruction. In the "stage of destruction," lasting one to three years, the disease progressed until there was gross destruction of the vertebrae with deformity, subluxation, contractures, and abscess formation. The abscesses finally ruptured and drained as ulcers and sinuses developed frequent secondary pyogenic [pus] infection...

...[S]pinal tuberculosis...causes a sharp angulation, of "gibbus" deformity of the spine, with impingement on the nervous tissue of the spinal cord, leading to paralysis...

Even if my great, great grandmother "only" suffered a fraction of what this young man did, I am saddened to think of it. Imagine trying to put on a brave face for a husband and (at least) five children. This revelation about her death gives so much more meaning to "she had been in bad health for some time but bore it well until the end."

May you rest in peace, Grandma Watts.

As an Amazon Associate I earn from qualifying purchases.

Nancy Jane Lincecum was born 2 August 1826, likely in Cape Girardeau County, Missouri. She was one of at least ten children born to Harmon Lincecum/Linsicum and Lucinda "Lucy" Thompson.

On 4 January 1848 in Cape Girardeau County, Nancy married Grotville/Grandville Wright Delap. He was born about 1816-1822, a son of John Delap and Matilda Mitchell. (This according to the family tree at FamilySearch.)

By the taking of the 1850 census, however, Nancy is back home with her parents. It seems her husband had passed away within just a couple of years of their marriage. I have not yet found proof of the precise time of Mr. Delap's death, and for a period wondered if the couple had simply split up. No life without Nancy has come to light, though, and a Mexican War Pension Index shows she filed for a widow's share in 1887. 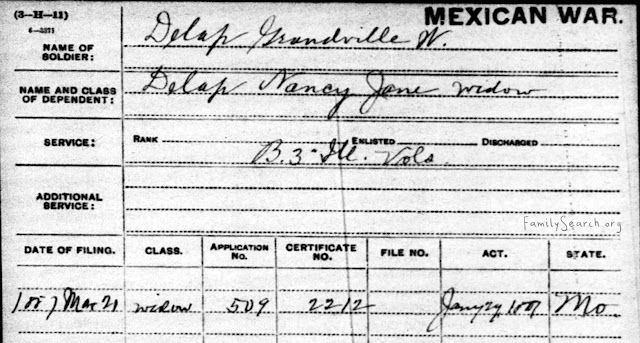 As you can see, Grandville was a member of the 3rd Illinois Volunteers. It's helpful to remember Cape Girardeau County, Missouri is across the Mississippi River from Alexander County, Illinois.

To my knowledge, Nancy and her husband had only one child -- a daughter named Rachel Matilda was born 4 September 1848. By the time the little one was a toddler, Nancy was a single mother. She lived with family most of the rest of her days. Her parents until they died, and her daughter and son-in-law after their marriage.

I know of five children born to George and Rachel Hitt. The 1910 Cape Girardeau County, Missouri Federal census noted Rachel had six children, with five living at the time. So there possibly is at least one additional child that likely died young.

- Robert L. Hitt was born 16 September 1873. He married Altha Wiseman 24 March 1904 at Cape Girardeau County, Missouri. She was a daughter of Thomas W. Wiseman. Robert died 4 November 1950 at St. Louis. Cause of death was coronary thrombosis, with hypertension and coronary artery disease. Altha died 19 February 1977, and both she and Robert were buried at Fairview Cemetery.

- Joel Levi Hitt was born 7 September 1884. For his 1918 World War I draft registration, Joel was described as tall and slender, with blue eyes and light hair. He was single most of his life, occupied with farming. For the 1930 Cape Girardeau County, Missouri Federal census, he was more specifically a poultry farmer. Joel married Emeline Cox 28 June 1930 at Cape Girardeau County, but the couple was divorced before the taking of the 1940 census. Joel died three years later from liver and gall bladder cancer. Burial was in Morgan Memorial Park Cemetery at Advance, Stoddard County, Missouri. 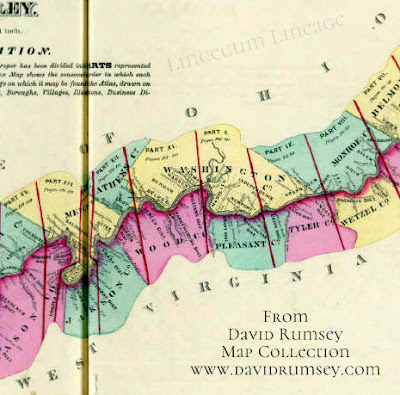 This is my first post regarding an individual who is of no relation to me. Ira is part of a sizeable group of LINCICOMEs found in the area of Jackson County, West Virginia, a good number of which descend from Levi Lincicome and wife Jeraldine / Geraldine McKee. Levi moved into West Virginia from across the river in the area of Washington County, Ohio. (Full disclosure: I am new to Ohio River Valley history and research.)

Michael Poe wrote the following in the Introduction for his book titled Images of America: Jackson County (pub. 2008).


The mighty Ohio River was the lifeblood of the early settlers and, for many years, it was the only way to reach the western edge of Virginia...

Communities flourished along the Ohio River in the early 1800s due to trade and commerce from keelboats and stern-wheelers...Sawmills in Ravenswood and Murraysville supplied wood for furnaces and food supplies for crews.

...By 1885, the Ohio River Railroad entered Jackson County, leading to trade extending the entire length of the Ohio River on the western edge of the state. The railroad established depots in Murraysville, Ravenswood, and Millwood along the river...By 1892, the Ravenswood, Spencer, and Glenville Railroad (RS&G) extended through Crow Summit, Sandyville, Duncan, and Liverpool into Roane County. 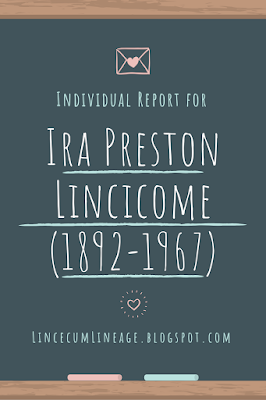 Ira married Birdie A. "Bird" McBride – who was about 17 years of age at the time – on 7 January 1914 in Jackson County. She was a daughter of Nathan F. and Effie G. McBride.

The young couple had a daughter, Garnet Aileen, before they were parted by Birdie's death due to Tuberculosis on 13 December 1916.

Nine months later, the widower Ira was serving his country in World War I, and it appears he spent at least some time overseas. Following from U.S. Army Transport Service Passenger Lists, 1910-1939 database at Ancestry.com:

Ira completed his service in June 1919. The following year, on 25 November 1920, Ira married Daisy Kidder in Wood County, West Virginia. She was born 22 February 1903 at Elizabeth, Wirt County, West Virginia to Greenberry Kidder and Sarah Ella Bishop. By April 1940, Ira and Daisy were settled at Ravenswood in Jackson County, where he worked as a car salesman. Some twenty years later, the couple was residing at 2508 Fairview Avenue in Parkersburg, Wood County.


Daisy died 30 March 1965 at Parkersburg, making Ira a widower once again. Her cause of death was Peribronchial Pneumonia, with contributing factors of Hypertensive Cardiovascular Disease, Diabetes Mellitus, and Obesity.