Diantha Lincecum (b. 1842) was a daughter of Harmon Lincecum/Linsicum (b. abt 1808) and Lucinda "Lucy" Thompson.  Diantha married Reuben Reed Kynion 12 October 1856 at Cape Girardeau County, Missouri.  According to an old family book, Diantha died 12 July 1886.  A couple of years later, Reuben married Mary A. McNeely.

Reuben Kynion died 21 January 1896 at his residence in Cape Girardeau County, Missouri.  This information was found on an Administrator's Bond created after his death – due to Reuben dying intestate (without a will).

An Administrator's Bond is a form of insurance that assures a person who is responsible for the paying of debts and dispersing of property – the administrator – acts legally and ethically and protects those who have an interest in the deceased's estate against fraud.

In the case of Reuben Kynion, the administrators (principally a Mr. Jacob Waddle) put up $500. 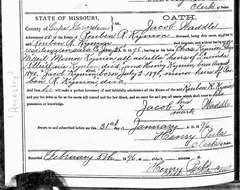 This document also listed the heirs of Mr. Kynion:

And that he will make perfect inventory and faithfully administer all the Estate of the said Reuben R. Kynion, dec'd, and pay the debts as far as the assets will extend and the law direct, and account for and pay all assets which shall come to his possession or knowledge.

One thing not detailed in the transcription, is this:  dec'd appears to be written above the name Jacob Kynion.  He and Henry were sons of Reuben and his second wife.

Compiling from all sources, including the heirs noted above, here is my list of children born to Reuben Reed Kynion and Diantha Lincecum:

Enjoyed reading through this, very good stuff, appreciate it.