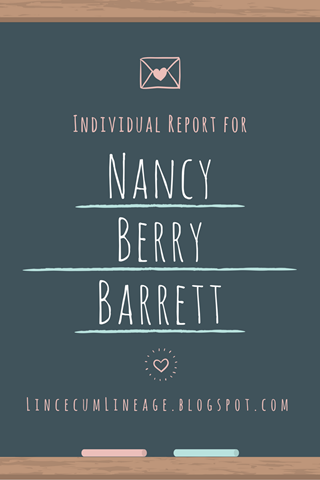 Nancy Berry was born between 1795 and 1799 in Georgia to Nancy Lincecum and William Green Berry.  She married William Barrett 12 October 1825 in Tuscaloosa County, Alabama.

- According to 1870 Pickens County, Alabama Federal census records, Nancy Berry Barrett was living among three of her children.  She was listed with her daughter Ophelia.  They were next door to son Gideon, and very close to son Green. 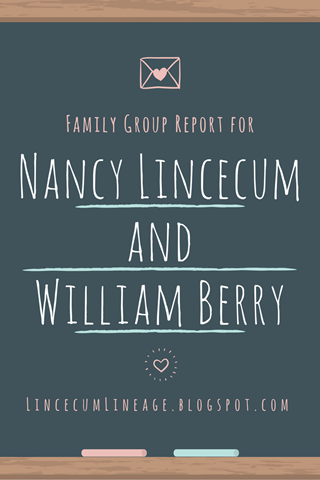 Nancy Lincecum is my 6th great grand aunt.  She was a daughter of Gideon Lincecum and Miriam Bowie, born about 1769 in either North Carolina or Georgia.  About 1788, in Georgia, Nancy was married to William Green Berry.  He was born about 1762 in Virginia.

The widow Nancy (Lincecum) Berry died September 1849 in Winston County, Mississippi.  Her death was noted on the 1850 U.S. Census Mortality Schedule for that place.

Shortly after the end of the American Revolution there appeared in a frontier settlement in Warren County, Georgia, an Englishman named Thomas Roberts, who  had deserted from the British Army and had served the last three years of the war with the Revolutionary forces.  He found Widow [Miriam] Lincecum struggling to restore her farm from war ravages and to support her three daughters with the help of only her strapping thirteen-year-old son, Hezekiah, the sole male Lincecum spared by the British.

Roberts was educated, charming, bold, and given to profanity.  When he came courting among the Lincecum girls they sent him on his way.

Nancy was one of those "Lincecum girls."

Sources available upon request.  Take all mistakes as good wishes.