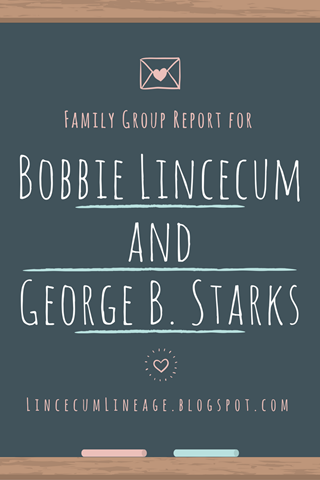 As you might imagine, Bobbie was sometimes assumed to be short for Robert.  This happened on at least one occasion that I have found.  She was noted as Robert Lyncicum in the 1860 Rapides Parish, Louisiana Federal census.  Other names/spellings I've come across include Barbry Lincecum and Bobby Lenccrem.  For the 1920 Grant Parish, Louisiana Federal census, the taker left off "Mrs." and noted her as G. B. Stark.

According to a Louisiana Compiled Marriage Index at Ancestry, Bobbie Lincecum married George Starks 18 November 1881 in Grant Parish. This may or may not be accurate, however, since the couple's first-born child is noted on occasion of having the birthdate of 5 October 1881.

George was usually occupied as a farmer, and he and Bobbie spent most of their lives in Grant Parish, Louisiana.

George Breckenridge Starks was "ambushed and assassinated" on 14 March 1914 in Grant Parish (more on that is in another post).  Bobbie did not marry again, and died 13 July 1949 in Rapides Parish.  Both were buried in Lincecum Cemetery at Grant Parish.

According to the 1910 Grant Parish, Louisiana Federal census, Bobbie had nine children (seven living).  I can only account for eight children, and I don't have firm death dates for the two who supposedly died before April 1910.

Sources available upon request.  Take all mistakes as good wishes.

Note: George and Bobbie were young teenagers at the time of the Colfax Riot, an event that took place not far from their homes.

Contact me and I can give you the rest of the story on George Starks. I believe we have shared info on the Lincecum family in the past. Sorry I haven't kept up. Give me a shout, it gets more interesting.
Penny Wyatt
pennylwyatt@gmail.com