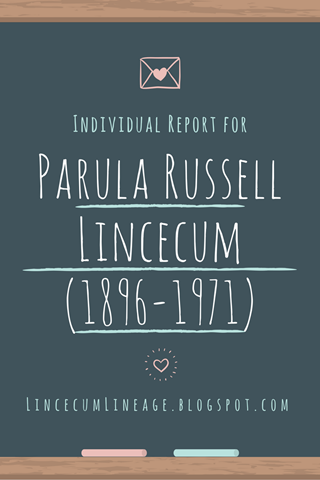 Parula Russell Lincecum was born 26 March 1896 in Gonzales County, Texas to George Durham Lincecum and Frances Amanda Stubblefield.  Parula was a veteran of World War I, and did marry a woman named Minnie.  He died 13 May 1971 at Arlington, Tarrant County, Texas.  Parula's remains were placed in the Hillcrest Mausoleum at Dallas, Texas.

- According to his 1917 World War I draft registration, Parula claimed exemption because his father was crippled.  Parula was described as tall, with blue eyes and light hair.

Parula's death certificate confirms he was a veteran of World War I.